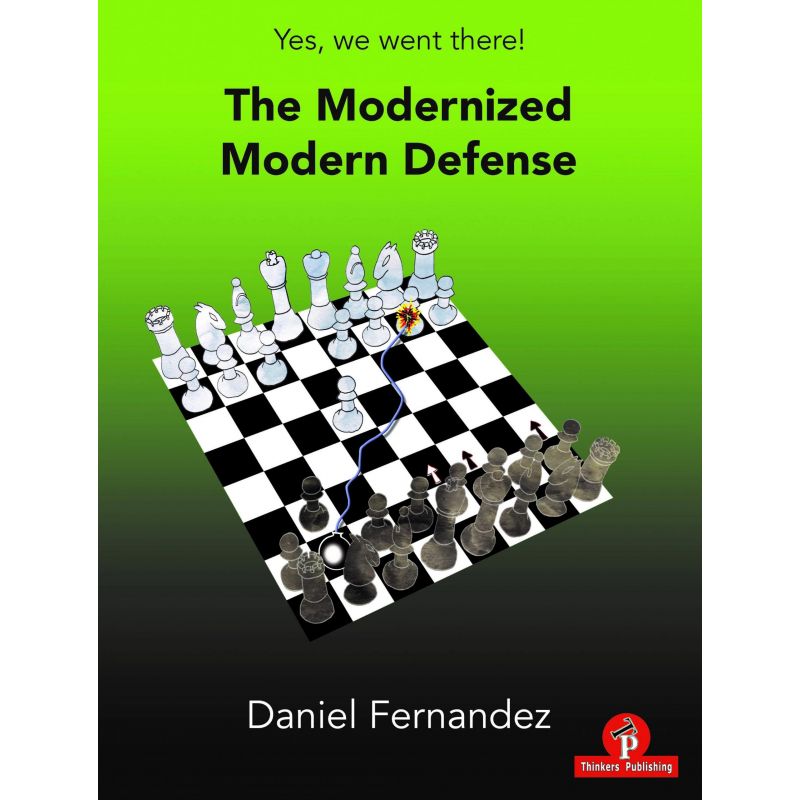 Playing the Modern Defense with any regularity is a sign that you truly love chess. From the very first move, you are indicating to your opponent (and to the jury deciding on the brilliancy prizes!) that you would like to play an unbalanced position. Then the thrill of the fight courses through your veins and you simply must trust yourself to handle developments better than the other player. For a very long time this truly was the absolute frontier, the Wild West of opening theory: if it went well you looked like a genius, if it goes badly you got mated in 20 moves, and most likely neither of you ever really made the analysis which you so badly needed to remember at the board.

A certain air of reckless abandon, of pure devil-may-care mischief, was needed to play it successfully, and to some extent still is. Something of this passion was conveyed into printed form by Swedish GM Tiger Hillarp Persson when he wrote his Tiger’s Modern. Even within the Modern, the crème de-la-crème of the opening, when I learned it from his book almost a decade ago was the famous Hippo setup, the epitome of the adventurer’s spirit.

While White goes about stationing his pieces aggressively, controls the centre, etc., Black nonchalantly places nearly all his pawns on the third rank and shuffles his pieces behind them! For some reason this appealed to the 15-year-old me: the idea that I could take the game to my opponent in a way that I chose, rather than by preparing endlessly for some subtlety on move 27 of the Poisoned Pawn Najdorf.

Throughout the year 2010 I played the Modern almost exclusively; it filled the gap between my 1 ... e5 phase and my 1 ... c6 phase. (The latter remained my main reply to 1.e4 until I began learning the Najdorf in 2018, but I do still enjoy regularly mixing it up with the Modern; there are more than 20 references to my own games in the text.) What might surprise you is that 2010 was the year in which my chess career started progressing by leaps and bounds! I became an IM relying very heavily on it; an example from one of my norm tournaments can be seen in Part I (Lahiri-Fernandez.) I embraced the complexity, the audacity and the novelty whole-heartedly, and it embraced me back.

Times are changing (as even the Wild West at some point became industrialized) and theory has developed on everything. It has therefore become possible, inter alia, to try and write a rigorous opening manual on the Modern. What I mean is not that equality has been found and this should be your exclusive opening choice for all time to come (I would be lying to you if I said that) but rather that there is now a roadmap as to how you should study this opening. About time, given the number of 1.e4 repertoires that have been written and which contain anti-Modern recommendations (usually in the ‘Other’ or ‘Miscellaneous’ section towards the back!) that nobody has taken the time to combat rigorously.

Furthermore, there has been a sea change in the ethos of Modern players (and also Pirc players): we no longer wish to get something totally new, or redefine the concept of development in Hippo style, but usually these days we want to get a Sicilian structure! That is to say, a position where Black gets to play ... cxd4 (or have White play dxc5) and thereby obtains a central majority that will stand him in good stead for the long term. That has now become the intellectual gold standard, a trend that has progressed in tandem with the inclusion of this opening in more players’ repertoires and its slow shift in towards the mainstream from the fringes of what is acceptable.

As artisans (for we must never forget our roots) on this moving fringe, it is important to have your bearings. Nowadays (and however much you feel like playing it freehand) if you want to include the Modern in your repertoire you should do some study. You should know, for instance, where White can get a safe plus (in my opinion, just chapter III.2), where White can get a less-safe plus (chapter IV.4), and where there are routes to equality, dynamic or otherwise (essentially the rest of the book!)

007 Introduction to the Modernized Modern

301 Chapter 2 - Austrian Modern without the early Be3

Born in 1998 Lukasz Jarmula is a 23 year old Polish International Grandmaster. Since 2015 he has represented SV Griesheim in the German Bundesliga. He holds 17 medals from the Polish Youth Championships in all categories: Individual, Team, Rapid and Blitz. In 2016 he shared 2-5th place at the European Youth U18 and in 2014 won the silver medal at the European Youth Team Championship.

The Bg5 variation of the Najdorf is the most critical and perhaps the most devastating weapon in the hands of the well- prepared player. In his first book for Thinkers Publishing, Lukasz brings us many sharp and aggressive ways to play for a win. The book consists so many interesting variations, we decided to split it into two volumes. We can only compliment hirn for writing a most complete book on a highly popular opening, the Najdorf Sicilian.

In this, the second book in his two-volume work, GM Martyn Kravtsiv shines the spotlight on the Italian Game (1.e4 e5 2.Nf3 Nc6 3.Bc4). Most chess players learn the basics of this opening as beginners, yet it contains enough depth and complexity to provide the world’s best players with a rich and ever-evolving battleground.

Though written unmistakably from White’s perspective, this work takes a different approach from that of a typical repertoire book. Rather than filling valuable pages analysing rare, inferior and generally irrelevant options, the author delves deep into the most important main lines, explaining the key move-order details and providing White with a series of well-researched ideas which will force your opponents to solve difficult problems at the board.

Join The Italian Renaissance and create your own masterpieces!

Martyn Kravtsiv is a Ukrainian Grandmaster with a peak rating of 2685, with expert knowledge and experience of 1.e4.